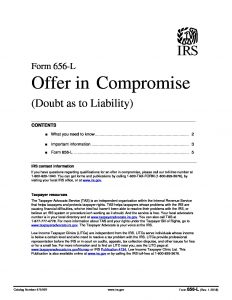 The IRS Form 656-L is the form used for IRS Offers-in-Compromise where the basis of the negotiation and compromise sought with the IRS is that you can show that you do not owe the tax liability on the merits. For example, you have proof that would give the IRS reason to believe you were entitled to additional deductions not previously allowed or received less income than previously claimed. This is different from the more common Offer-in-Compromise based on “doubt as to collectability”, which requires the IRS Forms 656-B and 433-A (OIC) and/or 433-B (OIC). While “doubt as to collectability” compromises” are based on your financial status, “doubt as to liability” compromises are similar to an audit or re-audit (though audit-reconsideration is an option that should also be considered in these circumstances). For the “doubt as to liability” fresh-start type of Offer-in-Compromise, you must submit the IRS Form 656-L along with an explanation and proof justifying the decrease in your tax liability.

This form was uploaded on 12/30/2018. The IRS website should be checked for updates.