Trader in the securities market in the office is indignant over the phone looking at the schedule of forbes or forex exchanges. 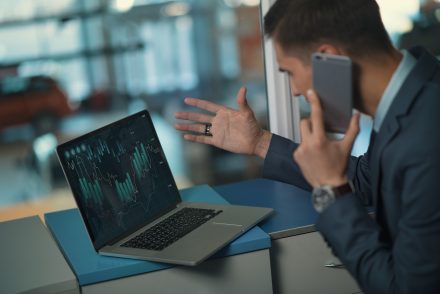 An article on the Forbes.com website providing rankings of the ten best and ten worst master’s degrees (of only 45 popular degrees) has listed the Master’s in Taxation at no. 7 among the worst of those degrees.  The article (which annoyingly, in my opinion, requires page-flipping – a tactic known to drive up page-visits – through 21 different pages) can be found by clicking here. The page specifically identifying the taxation degree as No. 7 can be found here.  According to the first page of the article, the ranking is based on pay growth from early to mid career, stress, meaning derived from work, and the projected employment growth of jobs.

To be clear, I hold a Master of Tax Laws in Taxation, an LL.M., earned after my principal law degree from the University of Chicago.  The LL.M. in Tax is not the degree identified by Forbes.  Rather, Forbes appears to be writing about the Master’s of Science in Taxation, a degree often obtained by non-attorney tax professionals.

It is unclear how the tax degree actually ranks in each factor, causing it to be ranked in the bottom ten.  The only statistics provided are early career pay of $61,300, mid career pay of $126,000, and projected job growth of 9%.  However, those are far-removed from the No. 1 “worst” spot holder’s stats (Criminal Justice, $41,600, $63,600, and 7%, respectively).  In fact, a master’s in Management Information Systems degree is ranked as the No. 6 “best” degree, but has nearly identical stats in these three categories: $64,600, $118,000, and 9%, respectively.  The only way of reconciling Tax’s poor showing in the ranking is to assume that Tax performed poorly in another factor, such as stress or meaningfulness of the work.

Speaking for myself, I love what I do and, while there are pressures of the work, stress is not an issue.  This factor would be fairly subjective.  If tax is stressful, then it may be the wrong profession for you.  Though, the fact that taxes are stressful for a lot of people is what keeps many tax professionals in demand.

I also find the work to be meaningful.  Taxes are the one place that every working person, and many non-working people, interact with the government every year.  For many people, dealing with auditors or collectors may be the most intimate interaction they every have with the government.  Ensuring that the government stays within its limits and that people’s rights are protected is extremely important and the tax laws are simply one of many battle-grounds in which lawyers act as advocates for ordinary people.  Granted, my job is more adversarial in nature than preparing tax returns, but there is purpose and intent in every communication with the government, which all starts with a return.